The South Dakota Supreme Court celebrated its 125th Anniversary in 2014.  The five then-current Justices and former Justices still living gave personal interviews as the start of an oral history project for the benefit of ours and future generations.  A handful of veteran attorneys were also interviewed to provide a history of our state bar.

The project includes a video tour of private areas of the courthouse, as well as reviews of former Justices who were no longer with us when the project launched.  The Honorable Mildred Ramynke is one of the highlights of the project, the first female District County Judge, Circuit Judge, Presiding Circuit Judge, and first woman to sit on the Supreme Court by designation.

The project holds more than 70 hours of video and other materials, which can be found at the project’s website.  The complete interviews can be found on the South Dakota Oral History Center’s website (courtesy of the University of South Dakota). 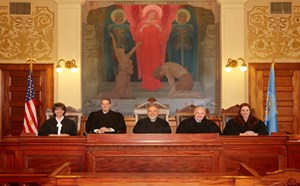